Posted by J.R. Villada on September 11, 2015 in Blog | Comments Off on INTERMEDIATE VISION AFTER PRESBYOPIA CORRECTION 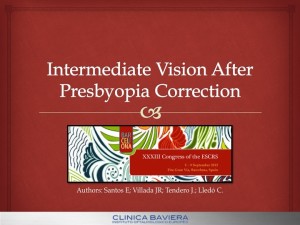 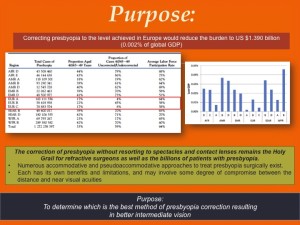 Presbyopia is an age-related eye condition where one of the signs is the reduction in the amplitude of accommodation, resulting in the loss of ability to change the eye’s focus from far to near. It is the most common age-related ailments affecting everyone around their mid- 40s. There were an estimated 1.272 billion cases of presbyopia worldwide in 2011. Of these, one-third of cases were among working-age people aged 40 or 45 years (depending on the age If all those people aged <65 years are assumed to be productive, the potential productivity loss would be US $25.367 billion or 0.037% of global GDP of onset in the applicable country) to 49 years, and a further 41% were aged 50 to 64 years. Correcting presbyopia to the level achieved in Europe would reduce the burden to US $1.390 billion (0.002% of global GDP) 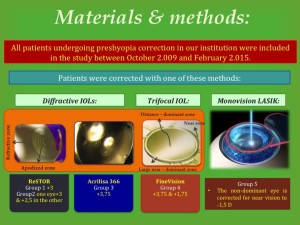 This prospective single-center study comprised of presbyopia patients who underwent monovision LASIK or routine phacoemulsification with three IOL models implantation between the period October 2009 and February 2012 at Clínica Baviera. Patients with either incipient or moderate cataract causing a significant reduction in visual qualities were included in the study.

The sample eyes were divided into four groups: Group 1 eyes received diffractive IOLs with AcrySof IQ ReSTOR +3,00 D and Group 2 combination of ReStor +3 in one eye and ReStor +2,5 in the other

These are based on the principle of diffraction, whereby light slows down and changes direction when it encounters an obstacle. These lenses use microscopic steps (diffractive zones) across the lens surface. As light encounters these steps, it is directed towards the distant and near focal points (the amount of light is directly related to the step height as a proportion of wavelength).

In 2012 the AcrySof IQ ReSTOR +2.5 D lens received Conformité Européenne (CE) mark and became available in Europe. This lens was lowered of the add power from 3.0 D to 2.5 D, measured at the IOL plane, moving the patient’s reading distance out from about 40 cm to about 50 cm.

Group 3 eyes received diffractive IOLs with Acri.Lisa.366 . It is a single piece, aspheric bifocal biconvex refractive-diffractive IOL. The surface is divided into main zones and phase zones assume the function of the steps of diffractive power of the main zones. The IOL power responsible for the distance vision is refractive and diffractive at the same time. The two focal points are created by phase zones on the anterior surface of the IOL. The near vision add of this lens is +3,75 D over the distance power. The technical details of this lens can be found in chapter: “Multifocal intraocular lens types and models”

The last group, eyes received Monovision with an excimer laser. It is a well- established technique that corrects one eye for distance vision (usually dominant eye) and the other eye for near vision, resulting in intentional anisometropia. This aim is to give functional near and distant VAs without the need for glasses. The mechanism that enables monovision to succeed is interocular blur suppression. The dominant eye is treated for distance vision to almost plano and the non- dominant eye is corrected to be slightly myopic for near vision to −1.5 D. 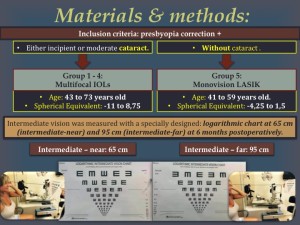 The study protocol was approved by the Clinica Baviera review board and written informed consent was obtained from all patients.

To qualify for the study, it was required that patients had been diagnosed with presbyopia. Patients with either incipient or moderate cataract causing a significant reduction in visual qualities were included in the study in group 1 to 4. The patients had no other ocular disease, and had not undergone prior ocular surgery. Subjects were included if they were 43 to 73 years old, had expressed a desire to be independent of spectacles and their pre-surgery refraction was a spherical equivalent from -11 to 8,75. Patients of group 5 had presbyopia without cataract, they were 41 to 59 years old and their pre-surgery refraction as spherical equivalent from -4,25 to 1,5. 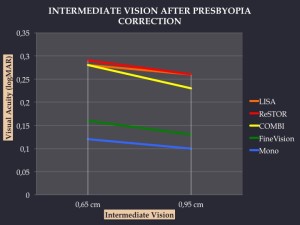 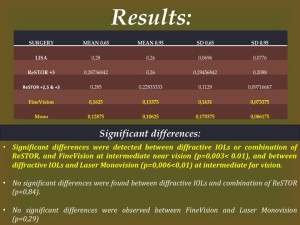 Both, the implantation of Fine Vision Trifocal and laser correction with monovision, provide excellent results in near and far intermediate vision

Fine Vision Trifocal is the best choice for patients who want a definitive solution to the visual demand with either or incipient cataract.

Laser Monovision is the best choice for younger patients who want simpler solution and know they will need intraocular surgery in the future. 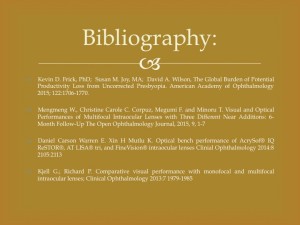